Tradition has it that there are only seven basic plots.

When you see that list written down, and think of your favourite books, films and TV, then they will all fit in to some degree or another with the above. Some will cross over more than one. You can write a tragic quest story, after all, or a comic rags to riches tale. But in the end, those are the main building blocks of all stories.

Now, whenever you see them written down like that, you’ll get smartarses who claim that every story has thus already been written.

That’s nonsense. All these plots are malleable, they are there to be changed and moulded by your hands and turned into something that’s yours.

Let’s prove this by having a look at the quest tale.

Let’s have a look at RAIDERS OF THE LOST ARK. 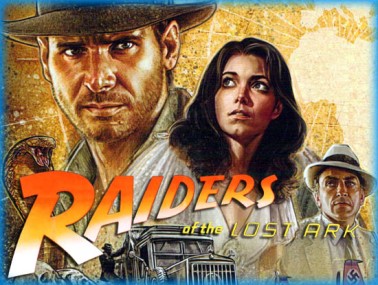 Basically, the plot of RAIDERS OF THE LOST Ark is this:

“An archaeologist sets off in pursuit of ancient religious icon, The Ark of the Covenant. Along the way he battles with his arch rival who has gone into league with Nazis. The archaeologist also reconnects with his lost love, and together they manage to track down the Ark. But the Nazis take it from them and open it up hoping to wield the power for themselves, but as the power is too wonderful and too dreadful for them it destroys them, leaving the archaeologist and his love together.”

There’s a bit more to it, I know, but I think that covers the bare bones.

So now that we have that as a structure, let’s change it around a bit.

Instead of an archaeologist at a ridiculously fancy and gleaming university, let’s make him a music teacher working out of his flat in East London.

Let’s go whole hog, and instead of Harrison Ford, let’s have him as a Toby Jones type. A middle-aged violin tutor in Walthamstow.

Now, what would this man hunt?

How about a legendarily lost Stradivarius violin that is believed to have mystical properties?

So, our hero, Toby Jones of East London is tracking down a magical violin in East London. He has to have a rival and this rival has to be some kind of equal. So maybe another slightly more suave and polished violin teacher.

Now that violin teacher has to have some extra threat behind him.

How about some evil French musicians from The Conservatoire de Paris? Capable of wonderful artistry, but unable to hide their evil brutish ways in the pursuit of the beautiful music.

Along the way Toby Jones reconnects with his ex-wife – who runs a sandwich shop in The City – and the two of them bicker and fight until they almost accidently discover the violin in a railway carriage heading to Norwich.

But the French musicians swoop in and take it.

A grand ceremony is held in an empty church in Angel. The other violin teacher playing the instrument. Toby Jones realises just in time what’s going to happen and tells his wife to block his ears so they can’t listen to it. The French musicians are disintegrated by the power of the music and Toby and his wife are left together to bicker another day.

There you go. The plot of RAIDERS OF THE LOST ARK adapted to a new purpose.

And if I were to write it as an 80,000 word novel, throw in discussions about old records, childhood friends and trips to see Arsenal, it would become entirely its own thing. As much Nick Hornby as it is Steven Spielberg.

But the structure of the plot is there. I may have altered all the details, but it’s still the bare bones of RAIDERS OF THE LOST ARK. Except this one centres a short middle-aged violin teacher with a contentious relationship with his ex-wife.

The plot is borrowed, but it’s borrowed to make its own thing.

Interested in my fiction? You can read the opening chapters of my forthcoming novel, EDEN ST. MICHEL here!

2 thoughts on “Thinking about Plots – part 3”

THE HELLBOUND DETECTIVE is out in a few weeks, but this is where I am with the next one... #frjameson #amwriting #workinprogress #indieauthor #horror
Here it is finally. What with all that’s going on in the world, the release has been delayed, but the new date is creeping closer. And here - drum roll! - is the cover reveal! Coming soon from FRJ Towers, THE HELLBOUND DETECTIVE. #frjameson #horror #newbook #newhorror #mustread #vampires #lovecraftian #darkfantasy #detective #noir
I've updated the covers on my Ghostly Shadows Anthology series and made them all of a piece. I'm pretty happy with the results. Here's the second of them. A tale of a car crash in South London which leads to something dreadful... #frjameson #horror #newbooks #must read #worcesterpark http://mybook.to/ghostlyshadows
A Lockdown Project. Reading big tomes I’d never be able to comfortably carry in my day to day bag. Finished the bottom two, top one next #amreading #lovkdown
I wish I could say that a charming child decorated this egg for display in our front window, but actually it was me. #easter #eggs #drwho #doctorwho
Given the horribleness of the news right now, reading a book which pairs nuclear Holocaust with killer, mutant rats is oddly quite comforting. Taking solace in something even worse, before returning to grim reality. #horror #horrorbook #justread #jamesherbert #apocalypse
%d bloggers like this: